Around the globe today is a special Holy Week for Christians. Good Friday commemorates the crucifixion of Jesus Christ and his death at Calvary and is the Friday preceding Easter Sunday. The week leading up to it in the small village of Chimayo (25 miles north of Santa Fe), there is a place that is precious and felt as mystical and sacred by many, including myself.

I wasn’t aware of  El Santuario de Chimayó  (pronounced CHEE’-mah-YOH’) until I moved to New Mexico a few years ago. Raised in a Irish Catholic family my mother and grandmother spoke and taught of miracles and apparitions celebrated the world over. From Sister Agnes Katsuko Sasagawa in Akita, Japan and her bleeding palm and the weeping Virgin Mary to the apparitions of Our Lady of Lourdes in France. While the miracles surrounding El Santuario de Chimayo have not been officially recognized by the Catholic church, the church is no less special because of this. The miracles of the church date back to the 1800’s.  I write this not on the history as it is lengthy and debated, but so you have a greater understanding of what visiting  El Santuario de Chimayó on Good Friday is like. To begin, there are many detailed accounts of Chimayo, here, here, and here, but in short, so you’ll have an overview, “sometime around 1810, a Chimayo friar was performing penances when he saw a light bursting from a hillside. Digging, he found a crucifix…(as the source of the light) dubbed the miraculous crucifix of Our Lord of Esquipulas. A local priest brought the crucifix to Santa Cruz, but three times it disappeared and was later found back in its hole. By the third time, everyone understood that El Senor de Esquipulas wanted to remain in Chimayo, and so a small chapel was built on the site. Then the miraculous healings began. These grew so numerous that the chapel had to be replaced by the larger, current Chimayo shrine — an adobe mission — in 1816.” Each time the crucifix moved, more grew to feel this was a place of miracles. Over time many came to pray at the foot of the cross asking for forgiveness of sins, better health, happiness, and special intentions.

Now, some 200 plus years later  El Santuario de Chimayó  has grown to become a place of pilgrimage for up to 40,000 each year during Holy Week. People travel by foot as far as 300 miles to the holy site. For days Albuquerque and I-25 are peppered with safety signage as the pilgrims sacrifice their safety sharing the interstate and surrounding roadways to reach the church. 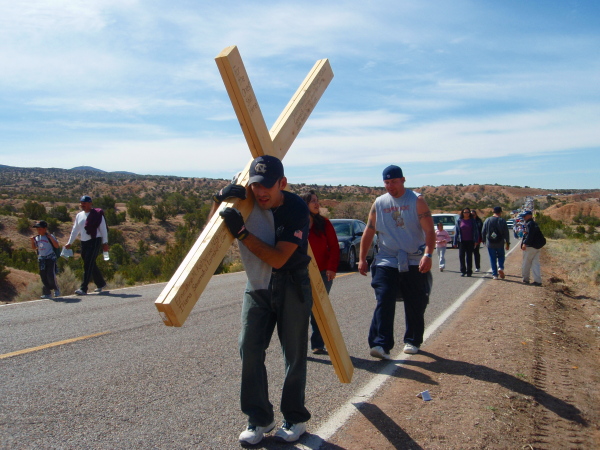 Many carry crosses, some barefoot as penance for sins, roadways are jammed by pilgrims looking to reach the site by car and by horse. Water is provided by neighbors, some people are jolly, some crying, many have photographs pinned to their backpacks or clothes. The young, the old, the infirm we are all wanting to visit the place of miracles. While I drove when I visited last year with my husband and parents, I would like to make the pilgrimage by foot. It is a time of reflection and of prayer. It is moving to see and to feel. From your arrival to the beautiful area, you feel the serenity,  and specifically for me, the magnitude of what you will feel, see and experience. Emotion and prayer envelop you in this beautiful valley. 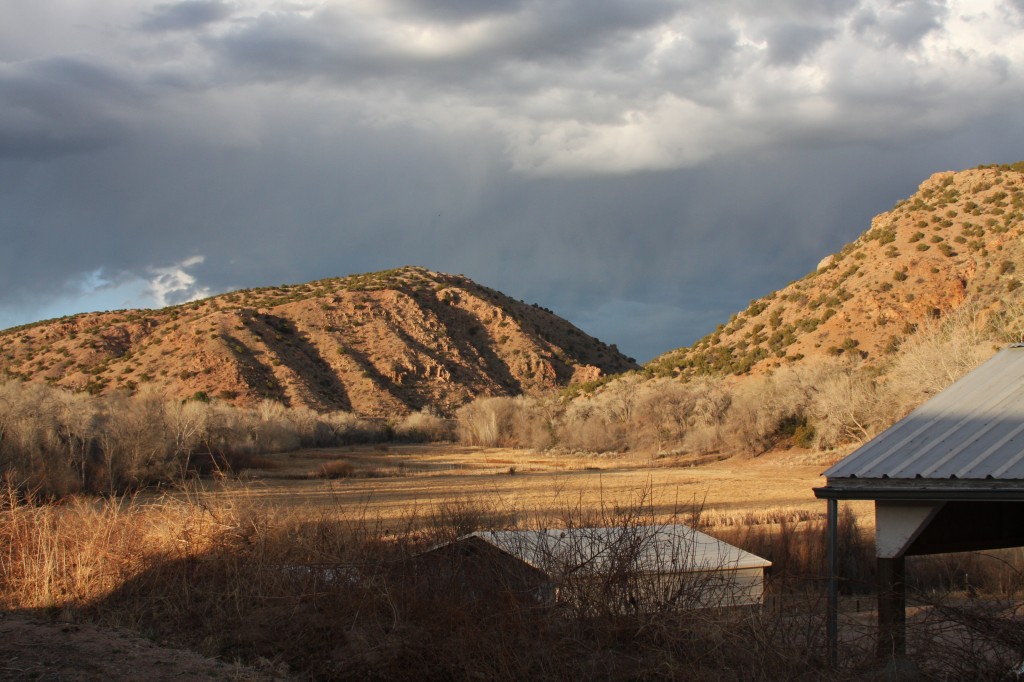 However, at that same time, you feel the pain many carry with them. Roadways are jammed and it takes sometimes hours to move just a few miles. When you arrive, you can’t “see” much by the road and wander if you are at the right place, just some signage and food stands selling traditional Indian Fry bread. 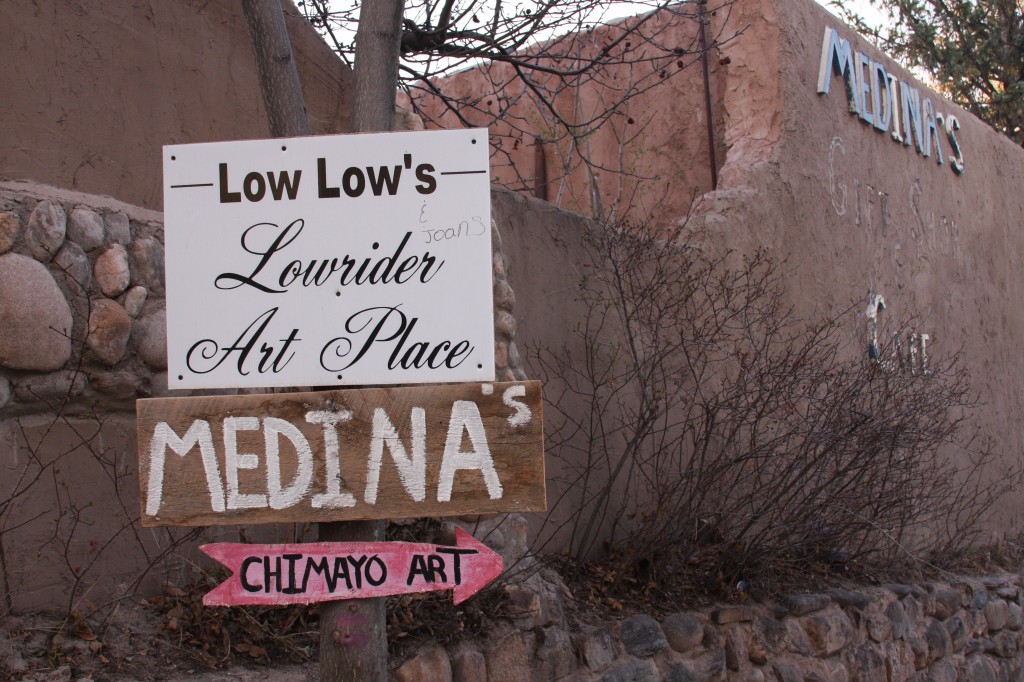 As you wander the dirt road, following throngs of people you’ll see El Santuario de Chimayó with lines that often last for hours. 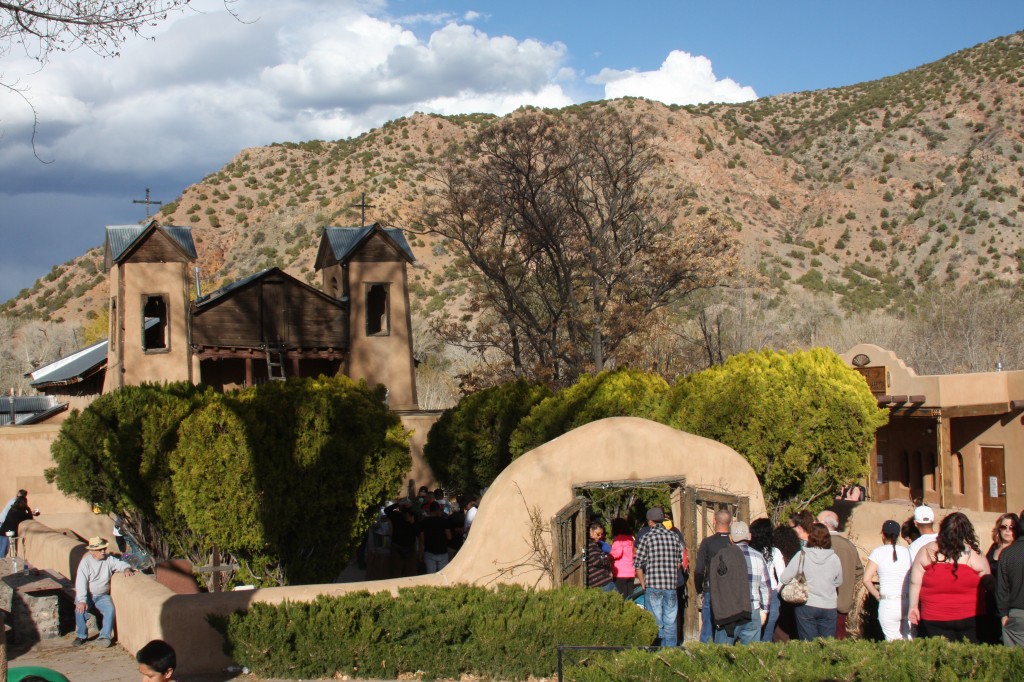 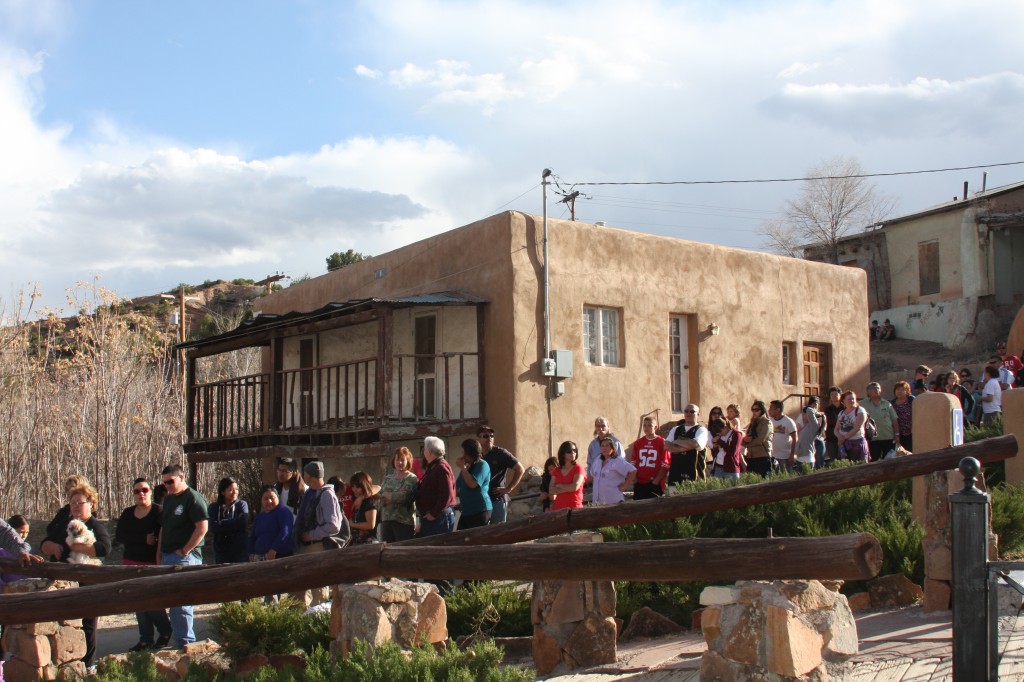 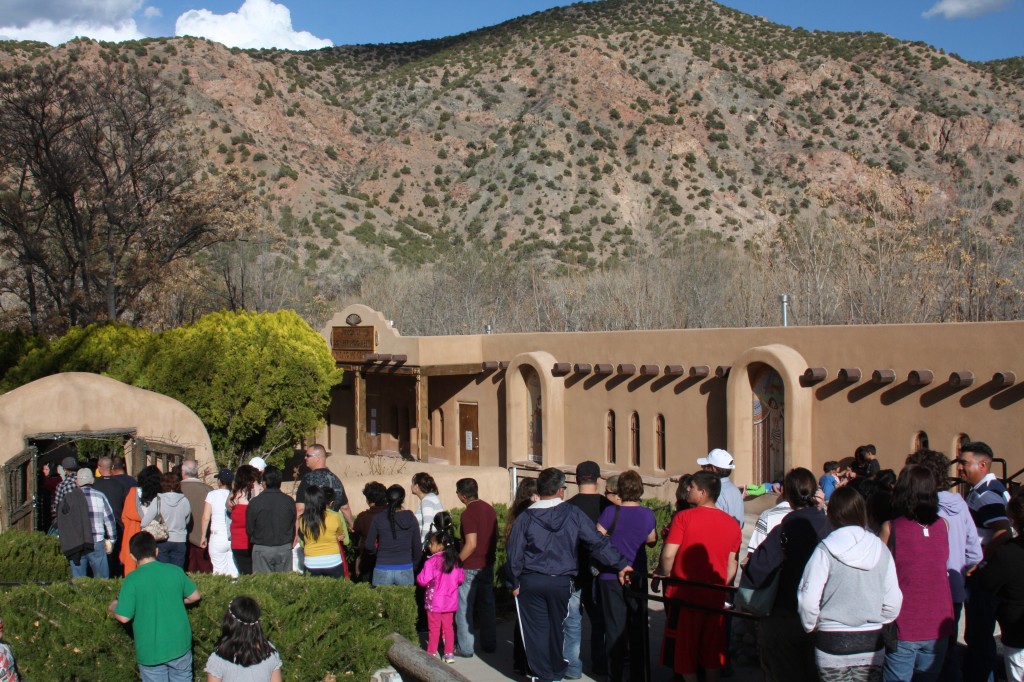 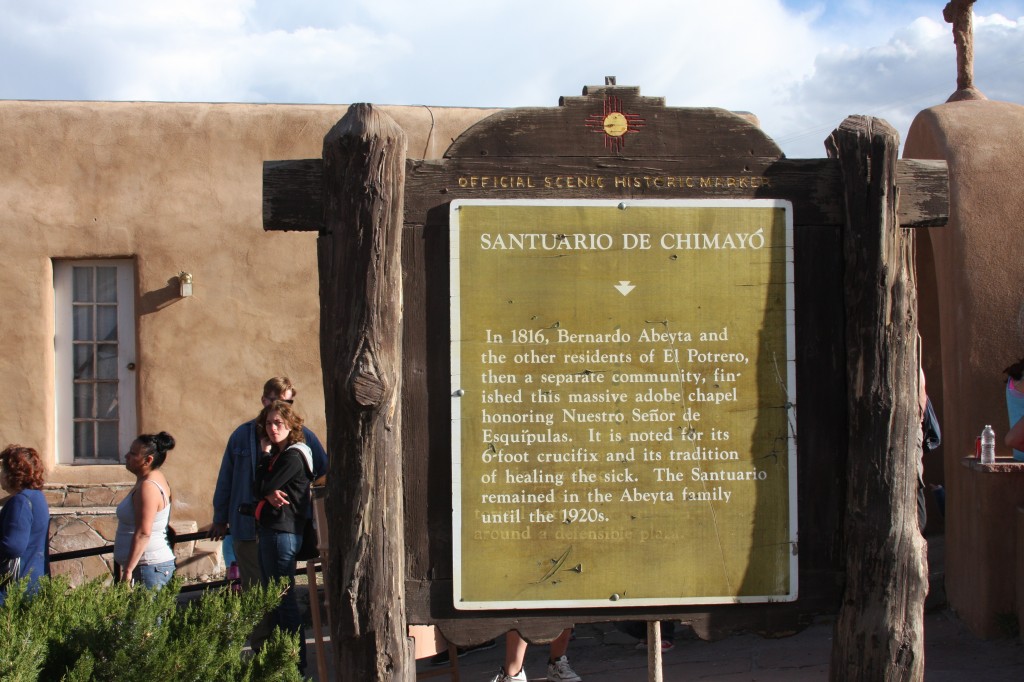 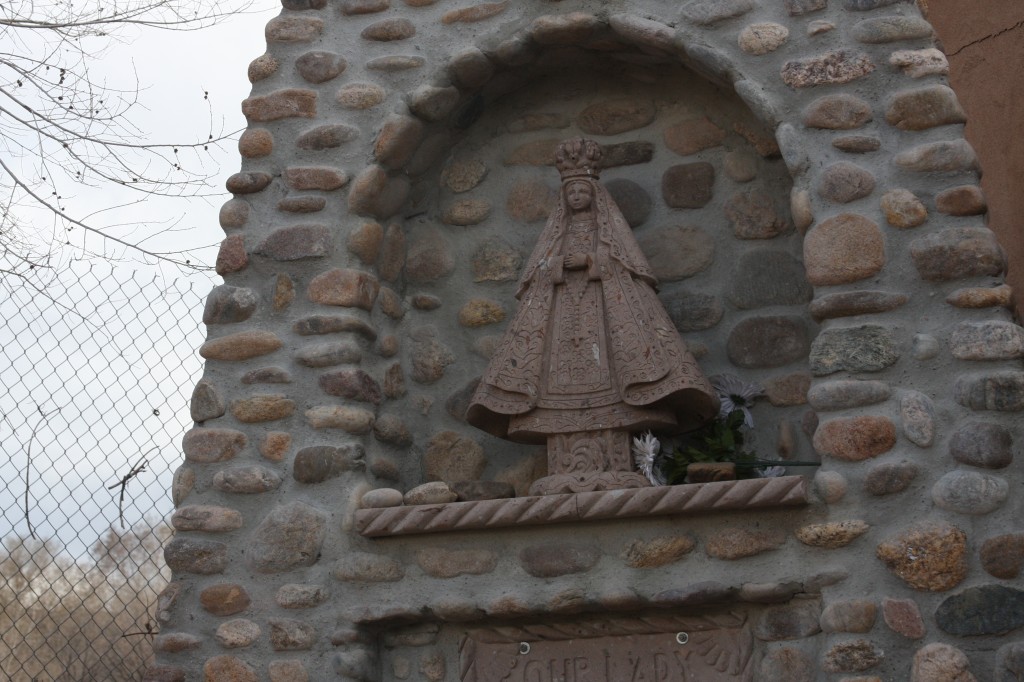 You’ll see photographs tucked underneath rosaries dated with the birth and death dates of loved ones. 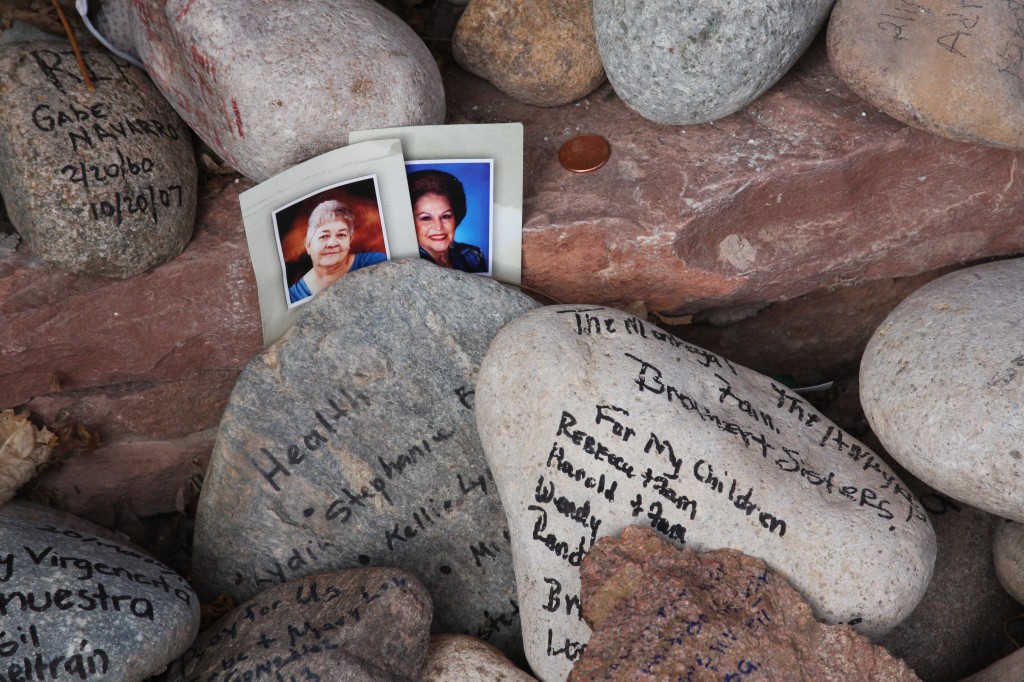 My favorite spot was this altar, I found it quite moving. I brought a candle, stopped and said a prayer and lit it. 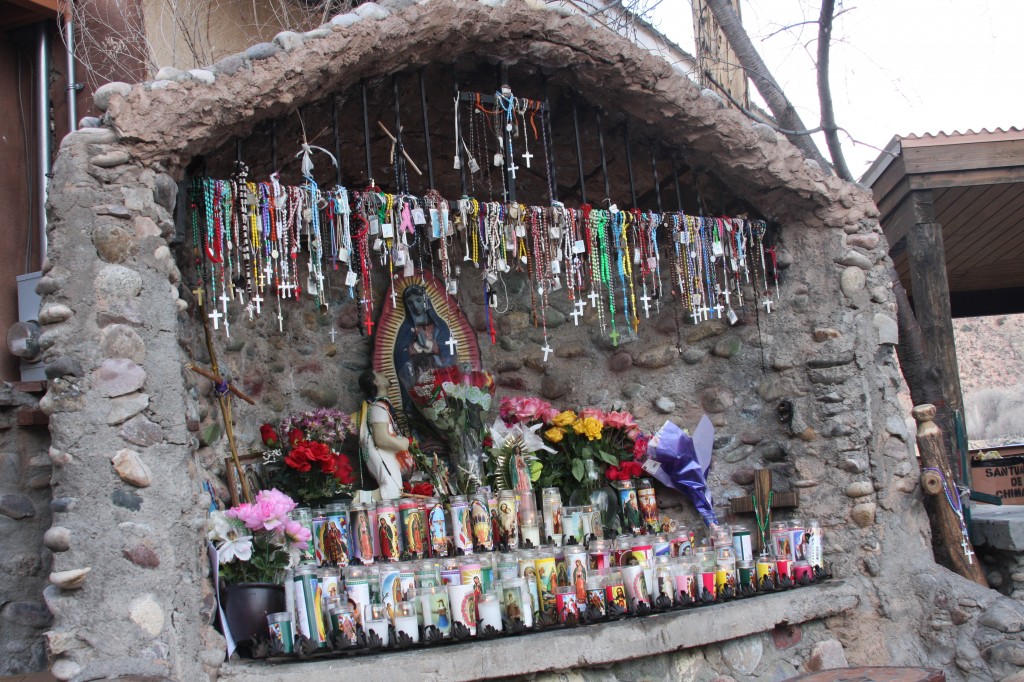 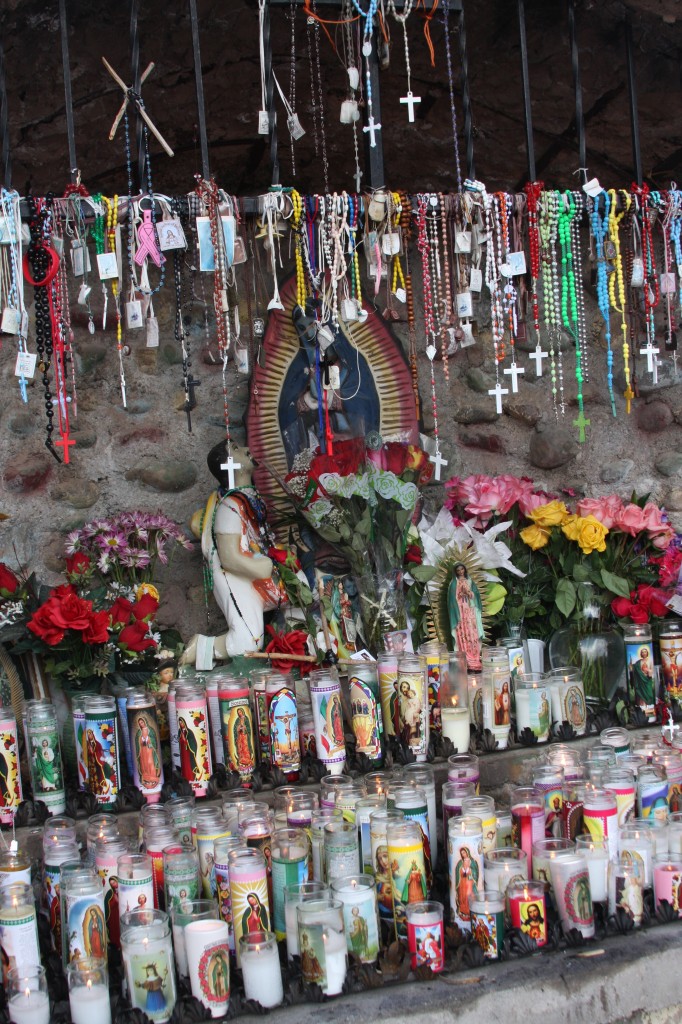 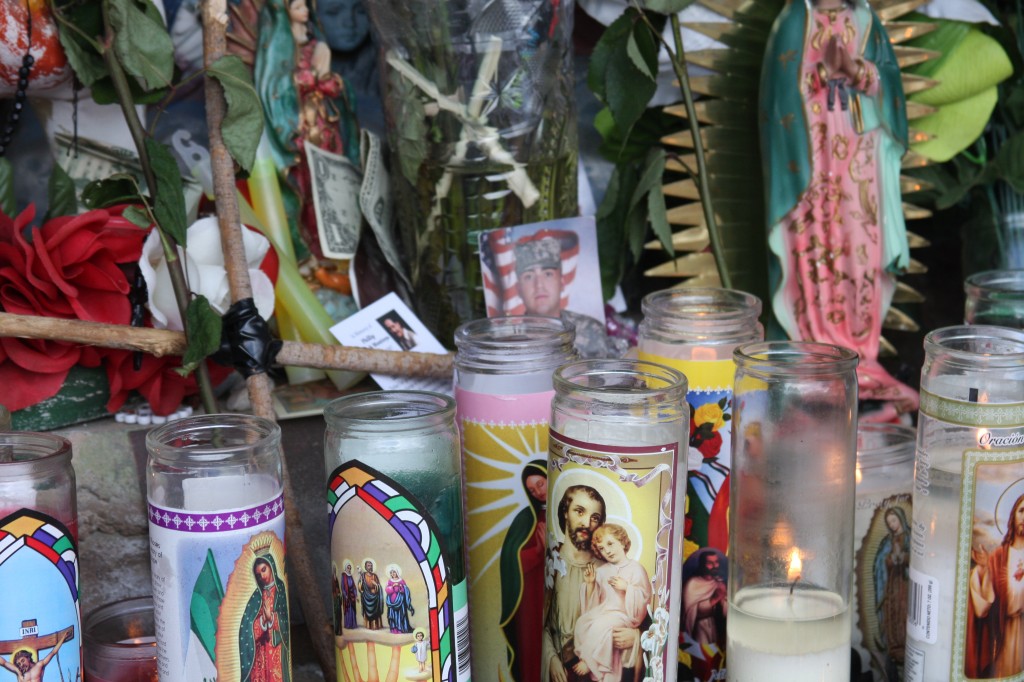 There were various altars and memorials in numerous languages throughout the grounds. 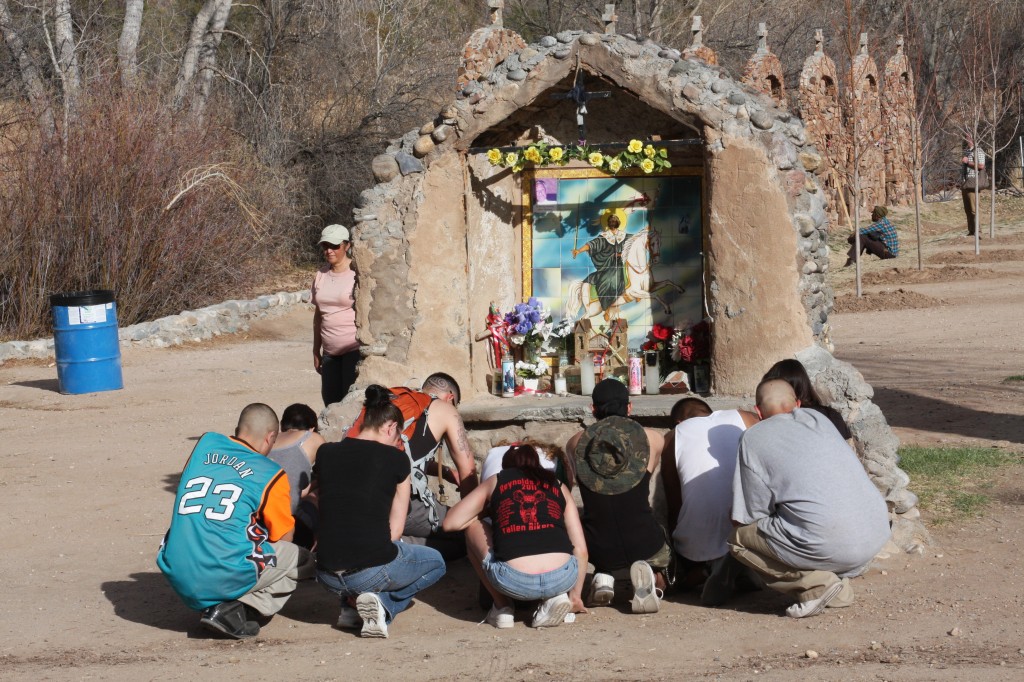 (One of many areas to pray)

You see prayers scribbled on notes, token gifts left behind and crutches, casts, canes walkers and the like left behind by those who were healed by the power and holiness of the crucifix of Our Lord of Esquipulas, God and their faith.

Prior to reaching the church, there are containers of blessed holy water. It is collected by most that pass it (in water bottles) to use in water fonts at home. Some drink it, some bathe in, some baptize their children in it, or simply use it in prayer. 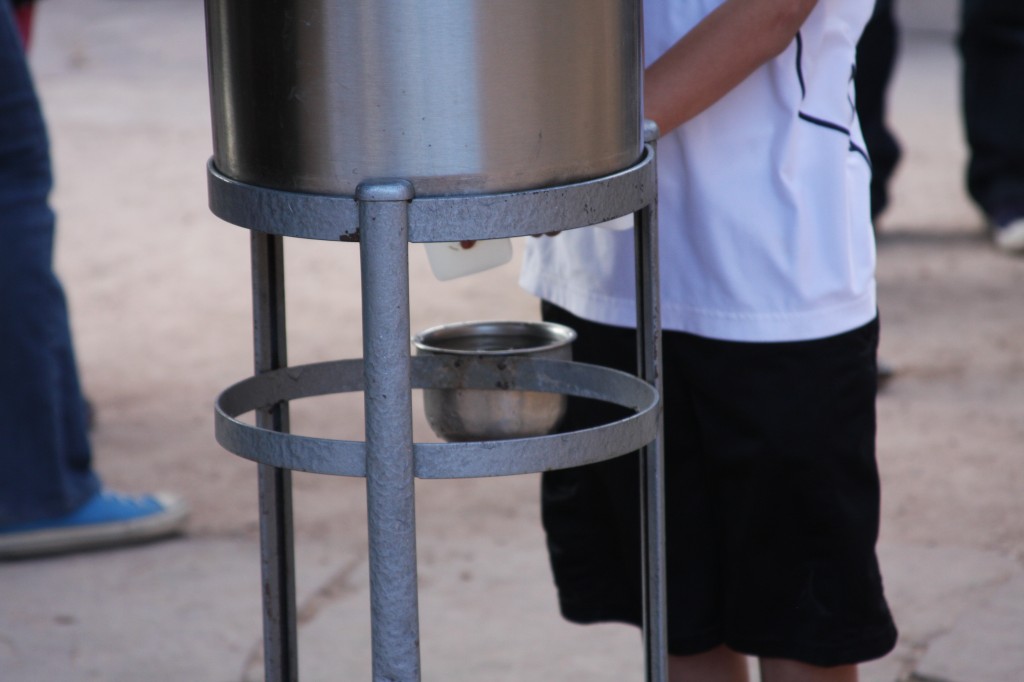 Adjacent to the crucifix and sanctuary is the Prayer Room, a site which you can scoop up the sacred dirt to take home with you. (I did not take photographs inside, I can’t recall if it was allowed. Frankly you’ll want to experience “it” not document “it.”) 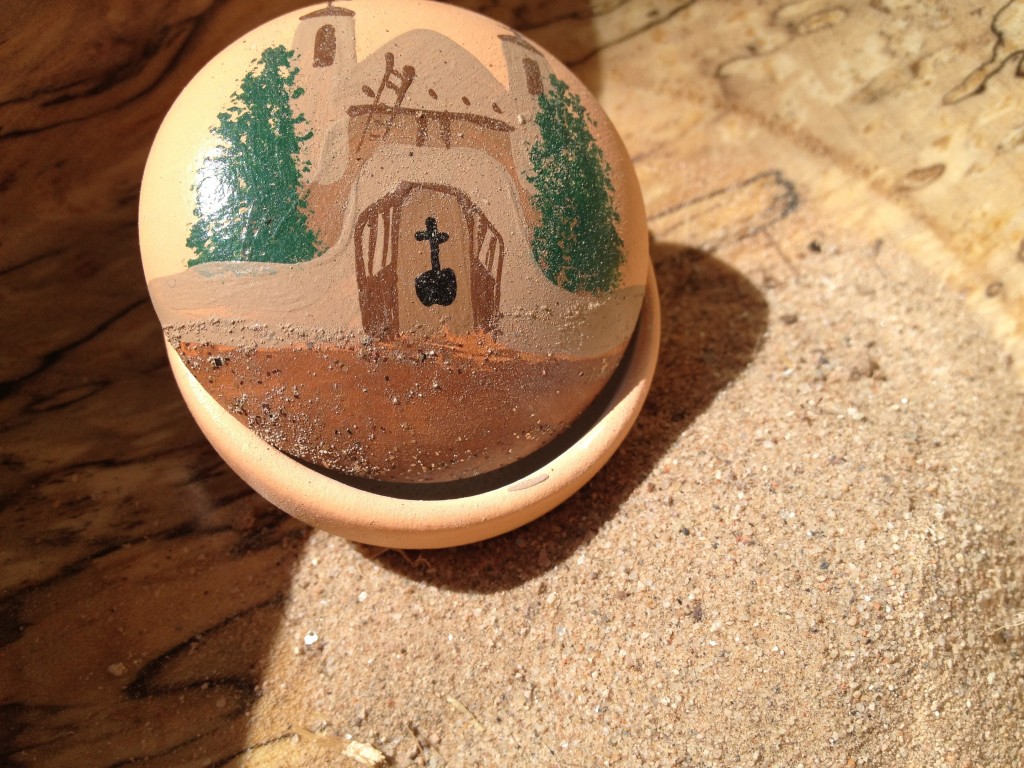 Many rub their children with it, make the sign on the cross on their own forehead, line their curio cabinets at home with it, but all honor the spirit of Christ, sacrifice and love. I highly recommend visiting on Good Friday. It is an amazing and authentic New Mexican experience. Whether you are religious or not, you feel a spirit and light surround you. 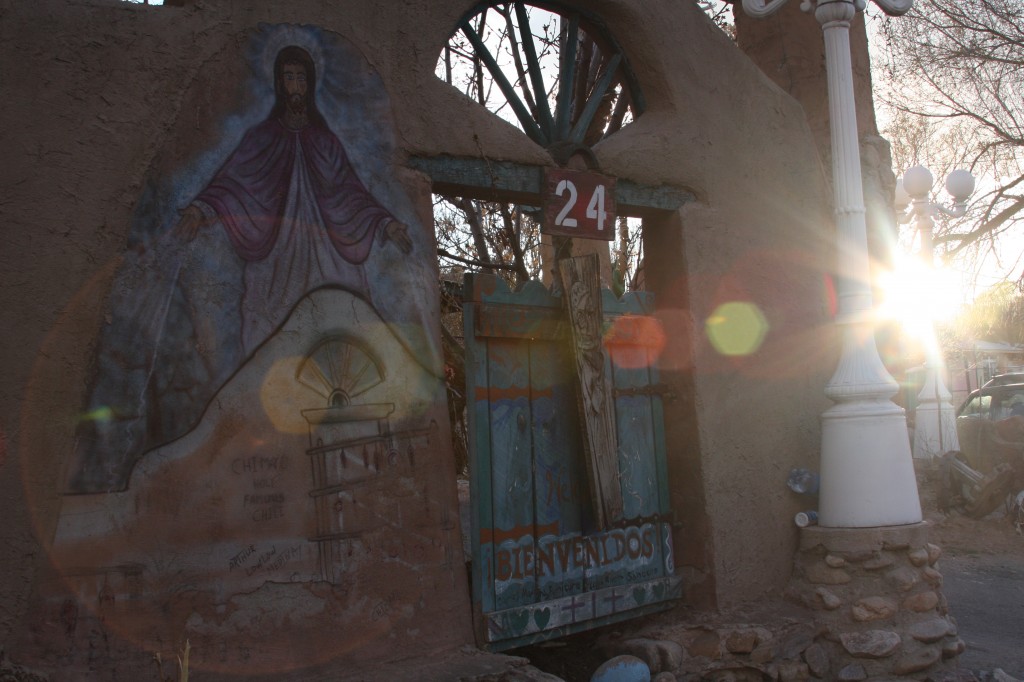