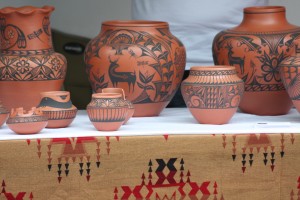 Little known fact that the original name of Santa Fe, New Mexico was La Villa Real de la Santa Fé de San Francisco de Asís, meaning “The Royal Town of the Holy Faith of St. Francis of Assisi.” Today that would be a tight squeeze on an envelope return address, so thankfully the name Santa Fe was adopted. Originally, the town was settled by numerous Native American Pueblos around 1050 to 1175. Certainly the draw of the Santa Fe River (extinct over 300 years ago) as a source of water was a powerful reason to settle the area. Around 1598 Don Juan de Oñate pushed to colonialize the area as New Spain. Around 100 years later there was a revolt from the various native Pueblo people to push the Spanish out. Later Santa Fe and it’s surrounding area were absorbed into the state of Texas. By the late 1800’s as the railroad system grew, Santa Fe was bypassed by the railroad in favor of nearby Espanola, as a result, the economy declined and the area suffered. “This was reversed in part through the creation of a number of resources for the arts and archaeology, notably the School of American Research, created in 1907 under the leadership of the prominent archaeologist Edgar Lee Hewett. The first airplane to fly over Santa Fe was piloted by Rose Dugan, carrying Vera von Blumenthal as passenger. Together they started the development of the Pueblo Indian pottery industry, a major contribution to the founding of the annual Santa Fe Indian Market.

In 1912, New Mexico became the United States of America’s 47th state, with Santa Fe as its capital.” 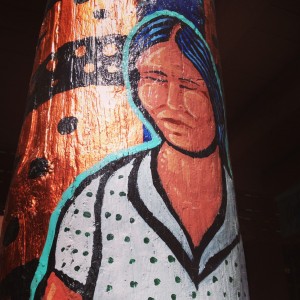 Perhaps you’ve been itchin’ to have an international travel experience, but your bank account says otherwise. Santa Fe, New Mexico, to me, is another mystical world that delights the soul and stomach! With a vast array of activities and experiences from Indian Pueblo visits to cooking classes at The Santa Fe School of Cooking, Santa Fe bustles with culture, cuisine, art and adventure. However, your lucky, as the annual Indian Market, held August 12-18th, is right around the corner, and you have time to make travel plans! The Indian Market is a festival celebrating the culture, art and traditions of Native Americans. You can expect sensational dances on the stage, breathtaking handcrafted artwork, textiles and jewelry & streets teaming with food vendors serving Indian fry bread, tacos, churros along side traditional fair foods. When you’ve had enough deep fried foods, head over to Chez Mamou French Café & Bakery. Divine, reasonable priced and perhaps the best baked goods & brunch I have ever had.) While of course you could blow your life savings on various artwork, you can also pick up one of kind “finds” for your home (or to wear) that are budget friendly. In regard to finding the perfect travel hub, I prefer to have a nice hotel oasis walking distance to the action that keeps me removed from tourists on the plaza. I have long been a fan of La Posada de Santa Fe Resort & Spa. It’s spa, sprawling grounds, gorgeous art collection and pool bar (summer season) keep me going back, dog in tow! That’s right, they are pet friendly. I wasn’t aware of their fondness of fur balls until a visit when I lounged by Jewel by the pool and later saw her meandering with her pooch. Since then, Faeden, my hubby and family have returned numerous times. With numerous intimate spaces both indoors and out, it is a wonderful place to consider planning reunions and group. Some rooms (try rooms 146-149) are cloistered with their own private outdoor patio perfect for late night chats over guacamole and chili spiced chocolates from nearbyTodos Santos Chocolates. For a more intimate experience, I love spending cool dessert evenings winding the night down with cocktails by their outdoor adobe fireplace with complimentary s’mores.