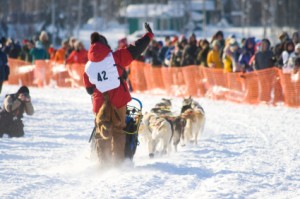 The Iditarod was founded in 1973 after much work by historian Dorthy Page and Joe and Vi Redington. These individuals felt that a race commemorating the great “Serum Run” of 1923 to Nome, Alaska needed to be recognized. In 1923 only one doctor and four nurses cared for the people of Nome and the surrounding area (about 10,000) when tragedy stuck, a diptheria outbreak. Extreme weather and a lack of aircrafts prevented more rapid means to deliver the needed anti-toxin as their current supply dwindled. The Board of Health voted to send 1,000,000 units of the needed vaccination via a 674 mile dogsled relay through the Artic Circle. The death rate rose in the Nome area as plans to execute the trip came to fruition. Eventually 300,000 of the 1 million needed units of anti-toxins were located in Washington State and sent to Nulato, Alaska. As the clock ticked and illnesses rose to near epidemic levels, musher “Wild Bill” Shannon headed out for the initial leg of 674 mile relay. The temperatures across the interior hit a near 20 year low reaching -45 degrees F and snow drifts of over 8 feet high impeded the dogs and mushers on their journey to Nome. Weather worsened to a temperature of -85 F with the windchill and discussion of cancelling the relay escalated.  By January 30th the death toll hit 27 and a according to a reporter in Nome “all hope is in the dogs and their heroic drivers.” Teams traveled in white out conditions. Finally at 5.30 am on February 2nd , musher Gunnar Kassen and his dogs, led by the now famous Balto arrived on Front Street with the lifesaving antitoxin. The modern Iditarod race is held on this historically significant route. The route varies from year to year, even years mushers take the northern route to Nome and odd years the southern route. (Due to this variable, the length varies but is approximately 1,049 miles) 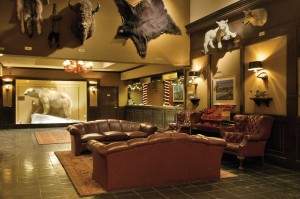 In honor of this years 41st running of  the Iditarod (starting on March 2nd) we thought we ‘d give you the inside scoop on travel plans for this historic event held each March. Whether you make it this year, or plan ahead for next year- the Iditarod is a must.  Not familiar with the history behind the race? Each year the race begins with a ceremonial start out of picturesque Anchorage, Alaska. Anchorage is a city of about 300,000 people and lies further north than Helsinki, Finland. The area is filled with notable mystique, vast expanses of beautiful land, a dwindling population of 11 distinct Native American tribes and is said to have more rugged, handsome available bachelors than any city in the lower 48. (Who says an educational trip can’t be smattered with some eye candy!) Anchorage is known for its tantalizing Alaskan Snow Crab but don’t pass up on other equally as tasty seafood. We highly suggest you reserve a room at the Millennium Anchorage Hotel, as it is the official Iditarod race headquarters. Here you can brush elbow with mushers, attend press conferences, buy some cool stuff, and most importantly see the dogs! Make sure to have breakfast at the Flying Machine Restaurant located right off the hotel lobby so you can enjoy a beautiful view of Lake Spenard with your hot cup of joe. (Which you’ll need to battle the chilly weather!) Waiting for the race to kick off, visit the Alaska Native Heritage Center Museum (call ahead for winter hours) or Midnight Sun Brewing Company for their house made beer.