(Scroll down for Winslow, AZ) 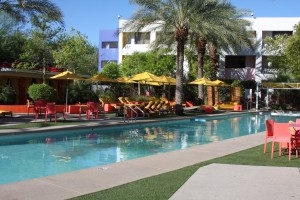 If only we were the ones that purchased 640 acres of desert land in what is now Scottsdale back in 1888 for the mind blowing low price of $3.50 an acre!!! Instead it was United States Army Chaplain Winfield Scott, the namesake of “Scottsdale.” He, like many after him, were drawn to the area by the favorable climate, beautiful scenery and irrigatable desert land. Like much of the dry west, many health seekers, predominantly those that suffered from respiratory distress/disease, sought the favorable dry, warm air. Turn the clock forward just a short stitch in time to 1910 when the Ingleside Inn, the first luxury resort of the area, brought refinement and golf to the area. By the late 30’s, and early 40’s Scottsdale became quite the draw. In 1937 famed architect, Frank Lloyd Wright, built Taliesin West in the McDowell Mountains. Cosmetics maven Elizabeth Arden even built a spa to draw for the well to do and celebrities. Turn the clock forward and today 80 hotels & resorts are located in Scottsdale and 743 and growing restaurants. And some damn fine ones too!

Gorgeous sunshiny days, amazing restaurants, outdoor sports o’plenty, and spas, lots of spas! Pick one, or all for a single day. While I am not a golfer, I can see the allure with courses as beautiful as those in Scottsdale, not to mention that you could play a new course daily for almost 3 months! Hiking, rock climbing, mountain biking, that is more my speed, and the area offers amazing options. You’ve probably heard of Camelback Mountain, but what about Tom’s Thumb? Whether you hike or climb it, it offers amazing views of Phoenix. After giving your muscles a wake up, why not wind down your day with an amazing massage and Cocoa Mexicano Wrap, a full body chili and chocolate wrap at The Saguaro Hotel spa. Decorated with the bold colors of desert flowers, you can’t miss the Saguaro. The hotel was purchased in early 2011 with plans to remain open while a complete revamp and re-branding occurred. The Saguaro ended up closing for 6 months allow for the overhaul that became necessary. What was delivered on November 3rd of that year was a sizzling, sexy oasis adjacent to the Civic Center Mall and Old Town Scottsdale’s art and shopping district. (Celebrations have even included live mermaids swimming in the pool!) They have become a quick hit landing on Condé Nast Traveler’s Hot List. What I love is that you feel like you have been somewhere. Bold colors, gorgeous art, attention to detail & amazing food. The Next Iron Chef winner, Jose Garces’ signature onsite restaurant serves up modern Mexican cuisine (and cocktails) to die for. Make sure to try the Pepino Fresco, my fave, and yes I sampled many (all in the name of research for you)-Avion Tequila, cucumber, watermelon and lime. Not my usual flavor profiles but trust me! (For breakfast don’t miss their Torrijas, tres leches French toast with Chantilly cream). If you are craving dessert while you are in Scottsdale, do not, I repeat, do not miss the Caramel pudding topped with house prepared caramel popcorn at Culinary Dropout. It is heaven in a cup! 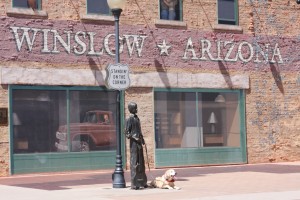 What a gorgeous blonde Standin’ On The Corner of Winslow, AZ (or laying, hey, I got a little tired)

Have you ever stood on the corner of Winslow, Arizona? We’ve heard it for years in the epic Eagle’s tune, “Take it Easy”, and that is just what a trip to La Posada Hotel in Winslow, Arizona is….your ticket to take it easy! Winslow, AZ was put on the map because of the prolific railroads crossing the west in the early 20th century. To be familiar with Winslow, you must be familiar with the history of the American Wests’ railroads and Harvey hotels, established by the late Fred Harvey. Harvey was an entrepreneur who developed lunch rooms across the rail system providing good, reliable eating establishments for travelers and later hotels, both of which catered to the wealthy and middle class. Harvey’s hotels became well known for bringing the experience of the rugged, wild American West to curious travelers, and for employing good looking, hospitable young women who served guests. The young ladies were never referred to as waitresses, but rather “Harvey Girls.” Harvey felt the young women brought dignity to an unruly west, and hired famed architect Mary Colter to build La Posada hotel in Winslow to be as distinctive as the famed Harvey Girls. As La Posada opened in 1930 the Great Depression was nearly in full effect and as a result the hotel never prospered. Much like much many western towns, Winslow’s health was tied to that of the railroad, then Route 66. I-40 was originally routed through Winslow, but eventually was built north of the city. Much of the city dried up for half of decade following the depression and rise of interstate travel, but with thanks to a strong core group Winslow is back on the map and Harvey Hotel, La Posada is the pulse of the town. 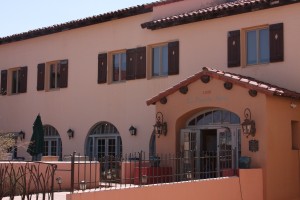 Route 66 in it’s heyday, teepee shaped hotels, kitschy roadside diners, and cowboy motif road signs. You CAN get your kicks on Route 66, but have you? Well, it’s time to experience Americana. What better way than to take a sentimental journey on historic Route 66. Need a place to stay that doesn’t remind you of a roadside attraction, but rather the pretty side of Route 66, the historic side, then La Posada Hotel along historic Route 66 has a room named for a famous guest waiting for you! Saved from demolition, La Posada hotel was purchased in 1997 with a vision to quench the bones of this lovely Spanish style hotel. Mission accomplished! The hotel is divine. Gorgeous traditional talavera tile, well honed woods, and beautiful leather upholstery accented by masculine ironwork, and that hasn’t even broached the gardens, maze, museum or deep set porches perfect for an afternoon read. All these things are beautiful on their own, but it’s the overall feel of La Posada that we love here at Plane & Jane. Somehow passing the metal llama sculpture as you walk your dog to the door (yes, yet another love about La Posada, they’re pet friendly! What’s a Route 66 tour without the tongue of your dog flapping in the breeze of the car window?) you solidly straddle history and modernity.  Settle back in your chair in their restaurant, The Turquoise Room, named after a private dining car from the Super Chief that ran between LA and Chicago, and enjoy a Prickly Pear Margarita (our favorite). Pair it with superstar local ingredients that honor both the Native people of America, but also chef John Sharpe’s commitment to Slow Foods. All of our meals were a delight when visiting, but Jane will be the first to tell you she’s planning a drive back soon for their bacon filled breakfast burrito and Arizona Green Chile Eggs (creamy polenta in a pool of green chile, tomato sauce topped with eggs, jalapeno jack cheese garnished with roasted corn salsa and fresh tomatoes) More of a sweets gal? Go for the Warm Prickly Pear Cactus and Spice Bread Pudding, need I say anything more than creamy bread pudding? We didn’t think so. So plan ahead, get up one morning and travel about 18 miles north of Winslow to the Little Painted Dessert (pardon us, “Desert”- we were still thinking about the bread pudding) County Park. This park, which is free (hooray, more money for margaritas) blew us away. You would never know from the lackluster graffiti ridden road sign that this park is a gem of the west, hell- of the world. After 6 continents of travel for Jane, the views in this park rival those of Machu Picchu. So grab your camera, plan to dip your toes in a different kind of sand, and carefully take the “steps” throughout the varied landscape….then go back to The Turquoise Room for more bread pudding!