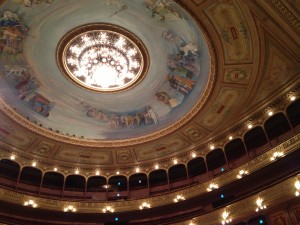 Perhaps it’s the visual image of dancing the tango on cobblestone streets, gauchos astride their horses or the colorful images of El Caminito that draws tourists to Buenos Aires. Having visited recently, it is these things, but so much more to me.  Buenos Aires is a massive city, and as I was tackling BA on a father daughter trip, extra special attention had to be paid to not overwhelm my dad with stops for 3,200 photographs, superfluous memento shopping or numerous historic landmarks that may overload him. This trip was about living in the moment, completely, with my dad. Ok, you got me- I did take numerous pictures, and “see” plenty, but this time I really made an effort to absorb the trip and not sweat what I didn’t see and focus on what I did see. In return BA gave me a stronger trip with my dad and a feeling of living in the city of “Good winds.” Setting us up for the perfect BA visit started with the perfect home away from home, the Hub Porteno. You all know by now I look for unique places to stay and prefer small establishments. Some of you may find this search overwhelming, but,…that is why I am here! (Have you reviewed Plane & Jane’s list of unique hotels?) I digress. Just because you seek unique places doesn’t mean you still can’t book on larger consolidators websites, i.e., Expedia, Travelocity, Hotels.com etc, Hub Porteno is on each of their sites. With only 11 rooms, the Hub Porteno is more like staying with family. You will find no branding on the buildings’ exterior, but will be welcomed with the grace of a 5 star resort. Those 5 star resorts often have so many guests that you are treated well, but lack personalized service. Personalized service is what the Hub Porteno is all about. Staff will visit with you as long as you’d like to better understand what you expect from your visit and will do everything in their power (and extensive network of contacts) to make it happen. The rooms are easily double the size of most hotels, which was delightful on a father daughter trip to not fall all over each other in a room. As a matter of fact, our room was nearly 20 x 20. The room was complete with a Nespresso machine and mini bar. Their mini bar is stocked daily, and items are complimentary (sans alcohol). Ah yes, Cachafaz dessert cookies & dulce de leche too! While there is an amazing spa treatment area and gym, what you need to know about, is breakfast. You may enjoy your divine breakfast (included in room your room rate) in your room, or in Tarquino, their in house restaurant. Easily the best hot chocolate of my life was included with the cooked to order breakfast. Once you have your craw full (what can I say, I am a southern girl), the staff will, in detail, map your destinations and hail you a cab instructing them of your destination (fantabulous for those language challenged travelers, ahem, my dad).  Here is where BA gets tricky. BA, much like New York City, can’t be adequately toured in just 5 or 6 days. There are a few musts in my book however. Make sure you visit the Cemetario de Recoleta, one of the most breathtaking cemeteries in the world. If you have an interest in photography just being here nearly assures you gorgeous images. You must take a tour of Teatro Colon. This opera house was originally built in 1857 and is often acoustically considered to be one of the top 5 performance halls in the world. Make sure to check their schedule for any performances. Sadly, Dad and I were there in a lull period and were only able to tour, but I’d return to BA just to attend an opera or ballet at Teatro Colon. While the city is full of amazing places to eat, try dinner at Fervor walking distance from your hotel so you can eat until your opera gown busts open. Then you can walk “home” to your PJs waiting in your massive, cozy room. Day 2 it pains me to say it, but take a spin to La Boca/El Caminito. While very touristy, the overall feel of this area, painted in bright colors to attract tourists once the railroad was diverted years ago is fun and lively. After a day meandering La Boca and El Caminito have Hub Porteno book you a tango show. We went to Café de los Angelitos, it was fine but next time I would try an authentic milongas. Milongas are tango dance halls where people gather.  If you’ve never needed to crawl into a phone booth call a phone # and give a password to get into a bar, try Frank’s Bar, a speakeasy with craft cocktails. If you haven’t gotten your belly full of enough empanadas this far into your trip, visit Cumana. A rustic Argentinian restaurant favored by the locals has both savory and sweet empanadas, my favorite of the whole trip were enjoyed here, quince filled. Yum-a-roo! Too bad you can’t fill your travel bag with these to share with friends back home! Instead, make sure you stock up on Vauquita (dulce de leche bars), my next favorite Argentinian confectionary delight.

“Buenos Aires was founded twice. A settlement at the present day site was established briefly in 1536 by conquistador Pedro de Mendoza, but attacks by local indigenous tribes forced the settlers to move to Asunción, Paraguay in 1539 and by 1541 the site had been burned and abandoned. The harrowing story of the attacks and the overland journey to Asunción was written down by one of the survivors, German mercenary Ulrico Schmidl, after he returned to his native land around 1554. In 1580, another settlement was established, and this one lasted.

The city was well-located to control all trade in the region containing present-day Argentina, Paraguay, Uruguay and parts of Bolivia, and it thrived. In 1617 the province of Buenos Aires was removed from control by Asunción, and the city welcomed its first bishop in 1620. As the city grew, it became too powerful for the local indigenous tribes to attack, but became the target of European pirates and privateers. At first, much of the growth of Buenos Aires was in illicit trade, as all official trade with Spain had to go through Lima.

Buenos Aires was established on the banks of the Río de la Plata (Platte River), which translates to “River of Silver.” It was given this optimistic name by early explorers and settlers, who had gotten some silver trinkets from local Indians. The river didn’t produce much in the way of silver, and settlers didn’t find the true vale of the river until much later. In the eighteenth century, cattle ranching in the vast grasslands around Buenos Aires became very lucrative and millions of treated leather hides were sent to Europe, where they became leather armor, shoes, clothing and a variety of other products. This economic boom led to the establishment in 1776 of the Viceroyalty of the River Platte, based in Buenos Aires.”