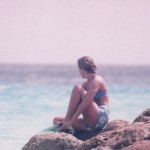 I vaguely recall my lanky 85 lb, rising 9th grade body, sitting in a dining chair in Hong Kong. My dad was awarded a trip from an insurance company for his businesses’ top sales. He was able to take my mom, and in this case, me! The trip (and conference) was hosted at the InterContinental Hong Kong which regularly ranks as one of the top hotels of the world. Everything detail, every request was delivered to the Nth degree, and I remember the hotel seemed to have everything gilded in gold. Beyond these details the trip is a little fuzzy. I remember taking the hydrofoil to Macau, touring a little of China (the trip was 3 weeks post the 1989 Tiananmen Square protests) as the Chinese government pulled back the reins on what they would allow us to see (we were originally to be in China for several days). Again hazy details, some 23 years later what sticks in my mind was sitting at a lavish banquet table at the InterContinental watching various performers and following the menu intently which was printed on the glass encasement of a fabergé looking egg delicately seated on an elaborate base. Yes, the menu, was printed on glass, and it had to have been at least 10 courses. I remember thinking “how cool” but beyond that, much escaped my teenage mind. It was until the roast sucking pig entered the banquet hall and was promptly delivered to MY table in front of MY seat. Eyeballs all dried out, apple in the mouth and hooves intact. This part of VERY clear, I was so disgusted I promptly hopped out of my seat and left the room that was very likely serving the nicest meal I could ever experience in my life. There is a time and place for everything, but at 14 I was hardly ready “to dine.” Turn the clock forward about 10 years. I planned my first international trip, sans parents. Curacao by way of Venezuela. You’ll hear about this trip a lot, as there was a lot of firsts…I love thinking back to this time frame of life, often thinking, what was I thinking? Venezuela is a whole story in it’s self, imagine wearing a tube top, shorts and flip flops in a culture that only “working women” dress as such. Yikes..lesson learned, always research customs and so forth prior to traveling. There were many snafus on this trip, but one delight. The one girlfriend that didn’t bail on the trip and I decided we’d splurge and have one night of divine food. We selected the finest restaurant on the island of Curacao at the time, what is now the Jaipur Restaurant at the Kura Hulunda Resort (which incidentally was featured on The Bachelorette last night, yes, my guilty pleasure). We took a tour of the grounds, saw their Indian Bridal Suite, which I still recall to this day for having the most beautiful, ornate 4 posted bed. The streets are lined with cobbled pavers. I recall feeling like I had hit adulthood all in one night from this one experience. My friend Jenn and I walked across the observatory gardens (full of ornate telescopes and astrolabs), and were seated as the only guests at the restaurant. Jenn was greeted by a young, handsome server, who with a pair of silver tongs delicately placed a white napkin across her lap. I had seen this, but still, it was impressive…and then he left, and I was left, napkinless. A minute or so of scrambling, he returned with a separate silver tray and tongs with black napkins. Again, he delicately draped the napkin across my lap, and bid farewell and headed back to the kitchen. Now, I wish I could say I knew what had just occurred, but I didn’t, neither did Jenn. After speculation, it was confirmed I received a black napkin as I was wearing a black dress, and the white linen fibers would have clung to my nice dress. Hook, line and sinker this Southern girl was hooked to fine dining. To this day when I am greeted with a black napkin, in lieu of a white one, I fondly think of Curacao. 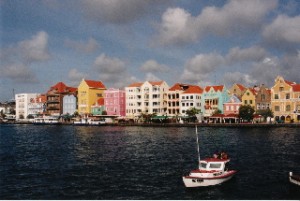 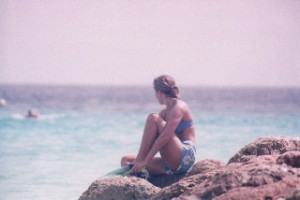