Grounded. In Waco. Life inside the Waco, TX airport…..

Posted Aug 20 2012 by Jane in Jane, Uncategorized with 2 Comments

Wheather, pardon me, I mean whether you are young or old, the word grounded has unfavorable connotations. Kids think of a night stuck of in their room eating nothing but peas. However if you are a traveler, “grounded” means grumpy passengers, weary business travelers & overpriced airport food. Today, today is different though…to get grounded, as in an intercom announcement prior to our scheduled landing in Dallas/Ft. Worth saying flights were grounded in DFW and we will be unable to land (due to poor weather). We circle for a bit, but now we are low on gas….new plan, the booming metropolis of Texarkana or Waco, TX will be our rescheduled destination. Ugh. OK, so not really what I said. I worked 30 hrs in 2 days on 3 hours of sleep two days prior, I really just want to get home. I had already been delayed in Knoxville traveling American Airlines due to mechanical issues, and traveled with a less than smiley airline attendant on a hot plane to get grounded. So I write to you from the lovely maroon carpet of the Waco, TX airport, on the hard floor, with a sore ass. Yes, literally I am sitting in Waco right now. We walked out of the plane to be told by American Airlines our oversized valet luggage would not be given to us so my book is a no go. It’s one room here, 3 doors make up the 3 “gates.” 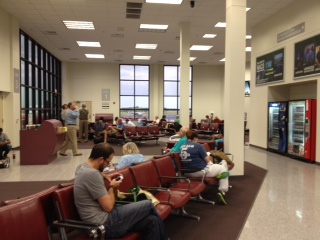 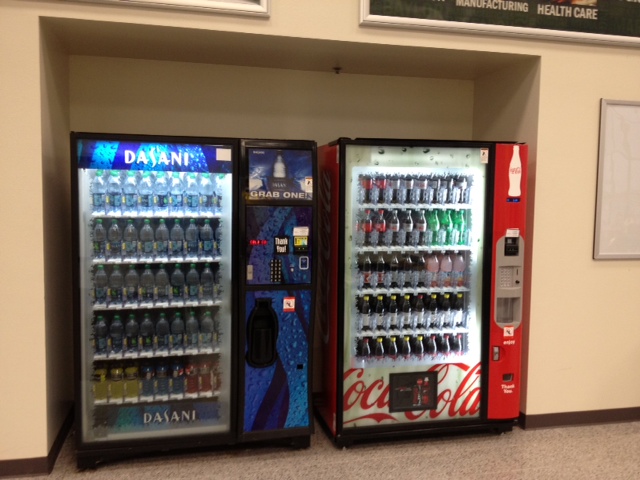 We can’t leave for food as TSA is gone and can’t check us through security coming back in.

So for our “comfort,” American Airlines provided snacks & beverages for a plane full of hungry people. 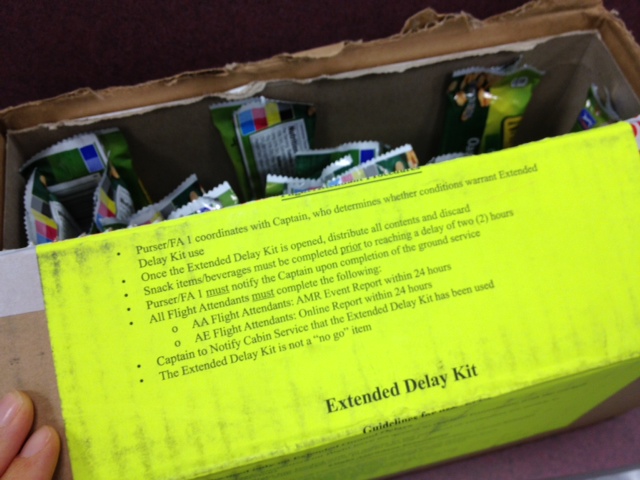 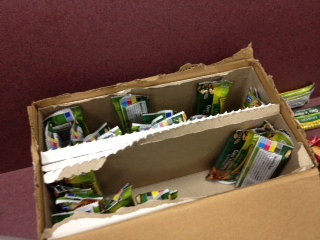 That was a good hour and a half ago. It’s now dinner time.  So it is 7.30, I’m hungry. Unlike perhaps the less seasoned traveler I NEVER, repeat NEVER travel without food. Inventory. 4 pks of fig newtons, 8 Stila bars, 32 prunes & 7 pks of 100 calorie almonds, 2 whole red peppers, carrots, 2 pineapple spears, and a high protein bagel. Odd yes, very odd yes, but I just hosted an event and happen to be cheap so the leftovers came with me from the snack session. Maybe I could make this into a money making situation…..

The rain keeps pouring. Wonder where the less than smiley airline attendant went? I thought I’d give ‘ol American Airlines a little tidbit of my thoughts via Twitter when alas, they responded. Has my blog powers begin to grow? They let me know that is was due to weather (no comment from American on the delay previous to the grounding). 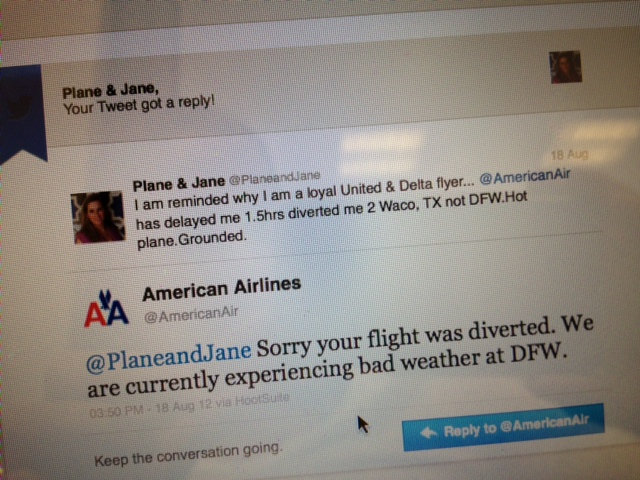 Weather. Roger that, but that fails to explain the poor service up until this point. 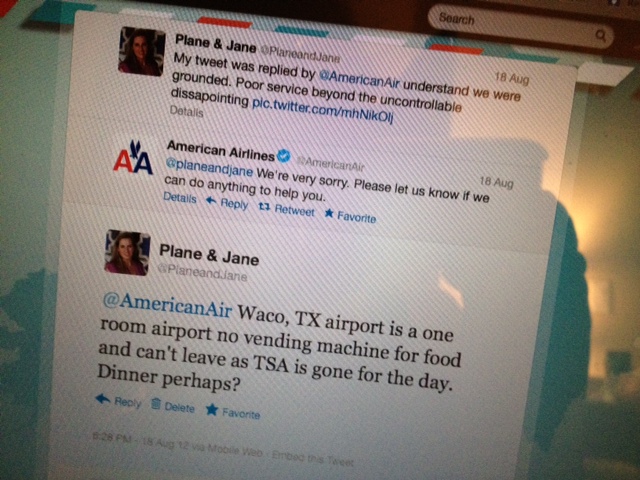 To my surprise, an offer to assist! What do I want? A private jet flowing with sparkling Italian wine to take me directly home….a free trip around the world? Let’s be realistic. They did offer? So I asked for something logical for 50 stranded passengers in an airport with no food. Ask for dinner!

Perhaps they never learned that a hollow offer with no intention of following up, is actually worse than painting the picture they may just pony up.

About 7 hours later and several more snafus on American Airlines part, a rather hungry blogger returned home…Do I plan to fly American Airlines anytime soon? Not unless I’d like another tour of interior of “Gate #2” in Waco, TX.